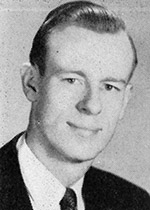 Eldon G. Schroeder, M Div ‘53 went to his heavenly home May 8, 2013. He was ordained following graduation from Northern and served as pastor for North American Baptist Churches in Texas, Iowa, California and Illinois for 38 years. Upon retirement he became the part time area minister for the NAB Conference of churches in Illinois and Wisconsin.

He is survived by his wife of 60 years, Ramona Schacht Schroeder, three children, seven grandchildren and 2 great grandchildren.

Eldon felt blessed to be able to travel and spend time with his children and families. He took delight in God’s creation and spent many hours working in his yard. Another favorite past time was fishing with friends and family. Eldon lived with Parkinson’s for 19 years and was able to stay active till the end of his earthly life. He will be remembered by the many lives he touched in ministry and throughout his life.

Interment was in Lorraine, Kansas, where he was born, raised, baptized, married and ordained. Over the years Eldon made it a priority to return to Lorraine with his family for vacations, school reunions and family gatherings.