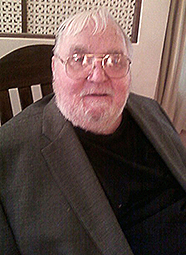 The extent to which Northern Seminary plays a role in the overall lives of students varies greatly. Many of our seminarians enroll for a season of life to grow in their ministerial prowess and relationship with Christ (we hope!) before God calls them into the next chapters of their stories. For alumnus Dr. Philip Nofsinger though, connections to Northern emerged many years both before and after his formal education here, in unique ways that only God could orchestrate.

Long before he even knew what seminary was, Philip made a decision at the age of nine to follow Jesus Christ after attending an evangelism event at his home church in Detroit, Michigan with his parents. The speaker at that service was Amy Lee Stockton, who had been the first student ever enrolled in Northern Seminary. God spoke powerfully to Philip through Stockton’s ministry that day, and it wouldn’t be the last time.

A few years later during high school, Philip heard the Lord calling him into vocational ministry while attending a Christian Service Brigade summer camp. The budding disciple began his ministerial journey by working at the camp for four summers during the 1940s, but he was not sure what his future in ministry would look like. Philip’s pastor at the time had received an honorary Doctorate of Divinity from Northern, so his pastor strongly recommended the seminary to young Philip as Philip’s aptitude for ministerial work became more evident.

Philip enrolled in Northern Seminary after garnering a Bachelor’s degree from Wayne State University. During his time as a student, he and his wife Carolyn were heavily involved in student activities, including Philip serving as the second-year class president. He recalls fondly the humor of professors like Julius Mantey and Warren Filkin, as well as the camaraderie of his peers. Most importantly though, he valued the overall growth he experienced in seminary related to learning how to do Christian ministry truly led by the Holy Spirit.

After graduating from Northern in 1957, Philip took an associate pastoral position at Foster Park Baptist Church in Chicago where he sharpened his skills as a preacher and youth leader. He then moved back to Michigan, where he would go on to spend the majority of his ministry career.

As previously alluded to, graduating from seminary did not mark the end of Philip’s relationship with the Northern family. Decades after his initial decision to follow Jesus, Philip, now an established minister, invited the same pastor whose altar call sparked his own conversion, Amy Lee Stockton, to lead a similar evangelism event. Whereas Amy once ministered to Philip in his youth, the two now served as colleagues and fellow alumni of Northern. As if that event was not significant enough in itself, God had yet even more in store for their reunion. In a seemingly-cinematic plot progression, Amy’s sermon at the event led Philip’s son, Steven, to decide to follow Jesus Christ fully for the first time. Two generations of Nofsinger men led to Christ by the same woman, Northern’s very first student.

Philip pastored at three different churches over the course of his 34-year tenure serving in the greater Detroit area. During that extended period he attained a doctorate of ministry from McCormick as well as became president of Northern’s alumni association for the state of Michigan. Upon retiring in Ferndale, Michigan, Philip began to serve as a volunteer chaplain for the local police force and later as hospital emergency room chaplain. In addition to Steven, he has two other children, Scott and Ellen, both of whom are seminary graduates. Philip is now 84 years old.

While we were interviewing Philip, we asked what advice he might give to current seminarians. He responded by saying, “[class topics and assignments] that might seem unimportant now will fit into your overall effectiveness in ministry in the future.” Thus Philip wants to encourage students to participate in all areas of seminary seriously and gratefully.

We at Northern Seminary are incredibly grateful for both the direct and indirect connections we’ve had with Dr. Philip Nofsinger over the years. May God continue to be glorified through the legacy of his ministry and future service.